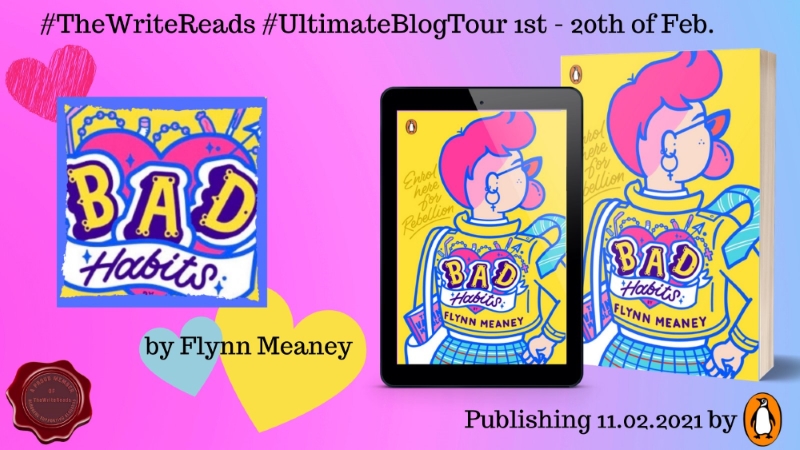 Hey friends! I’m excited to be back for another tour with @TheWriteReads for Bad Habits by Flynn Meaney. Be sure to check out all the other bloggers participating in this tour: here! 😍

Special thanks to Penguin & Netgalley for providing the ARC in exchange for an honest review!

Hilarious, bold, sparky and surprising, this is the funniest feminist book you’ll read all year.

Alex is a rebel from the tip of her purple faux-hawk to the toes of her biker boots. She’s tried everything she can think of to get expelled from her strict Catholic boarding school. Nothing has worked so far – but now, Alex has a new plan. Tired of the sexism she sees in every corner of St Mary’s, Alex decides to stage the school’s first ever production of The Vagina Monologues. Which is going to be a challenge, as no one else at St Mary’s can even bear to say the word ‘vagina’ out loud . . .

Flynn Meaney is the author of The Boy Recession and Bloodthirsty. She studied marketing and French at the University of Notre Dame, where she barely survived the terrifying array of priests and nuns, campus ghosts, and bone-crushing athletes who inspired Bad Habits. Since completing a very practical MFA in Poetry, she works for a French company and travels often between New York (when she’s in the mood for bagels) and Paris (when she’s in the mood for croissants).

TL;DR: This book was such a refreshing departure from what I’ve been reading lately but also from the YA contemporaries that I tend to read. Did I know that I needed a feminist YA story set in a Catholic school in the midwest that fights the patriarchy with The Vagina Monologues? No, but what a blast this was! I often found myself laughing-out-loud through all the silly and hilarious moments in the story and it was so well-written and easy to read that it wouldn’t have been difficult to get through in one sitting. I also have to mention how fitting this vibrant and bold cover is as it perfectly captures the story’s vibe and our main character’s personality and voice!

From the first page, it’s very clear that our main character Alex, with her purple faux-hawk and her rebellious attitude, does not fit in at St. Mary’s Catholic school. She’s loud and can be crass but she’s so very proud of her feminist stance and tended to view others at her school with a sarcastic and heavily judgemental gaze as they stood in ‘opposition’ to everything she believed in. While there’s no denying that she was a hilarious and witty narrator, there were moments when I felt a little worn out with her “know-it-all” teen attitude and the scorn she’d have for everything and everyone almost 90% of the time. Still, although Alex was pretty flawed and had a lot of learning to do, you couldn’t help but root for her because as a reader you can see that as much as she tries not to, her big heart cares a lot about this school and she does have good intentions. In the end she learns the hard way but I liked how the author dealt with her growth and helped her realise that her brand of feminism isn’t the only way it can present itself. These issues are not black/white. That said, I do think Alex’s character would’ve benefited from a more gradual growth throughout the story instead of having it be clumped on at the tail end, as there would’ve been more room to process the changes and for it to be more impactful.

Aside from Alex, I grew to really like the other characters in her orbit, especially her best friend and roomie, Mary Kate, and hockey jock, Pat. Although Mary Kate was the total opposite of Alex, you could see how much they cared for each other and how important their friendship was. Pat was a character that surprised me with his level-headedness and likeability and I really enjoyed the balance his character brought to Alex’s narrative. There were a few others that had interesting roles in the story and while they almost always stood in contrast to Alex’s character I really liked how they all mixed and fit together to create an enjoyable cast.

Bad Habits is a book that I wish existed when I was a young adult. The messages about embracing our bodies and not feeling ashamed because of what our bodies experience is so important and it’s the sort of message younger me badly needed! However, adult me still highly appreciates the message and I believe regardless of age, it’s one that is always important to hear. Overall, I’m so glad this book was put on my radar and I would highly encourage young readers to pick it up!

Have you read Bad Habits or is it on your TBR?

Working on my goal to #beatthebacklist in 2022 and I’m starting on my physical shelf with How to Walk Away by Katherine Center. Currently buddy reading this with the amazing @booksarethenewblack11 and speeding through it!
Post work pool views. #BooksOnHoliday
It’s been a hot minute since I posted. It’s also been a minute since my bookshelves looked so TIDY but I finally finished reorganising it (it only took me three days) and I wish I had powers to keep it this tidy for always 😭 #bookshelfie #bookstagramindonesia #bookstagram
My weekend has officially begun and I’m MORE THAN READY to dive back into my Jade War buddy read with @jessticulatesbookblog. I know Fonda Lee is gonna WRECK ME cos you know I’m still reeling from the destruction of my feels in Jade City 🥲🥲🥲
It’s my stop on the #blogtour hosted by @tbrbeyondtours for #CastinFirelight! Thanks to @delacortepress for providing an #ARC in exchange for an honest review! It’s also my first time doing a #booklook and y’all really make it look a lot easier than it was 😂
It’s my stop on the #blogtour hosted by @tbrbeyondtours for Glimpsed!

Proud to be part of…