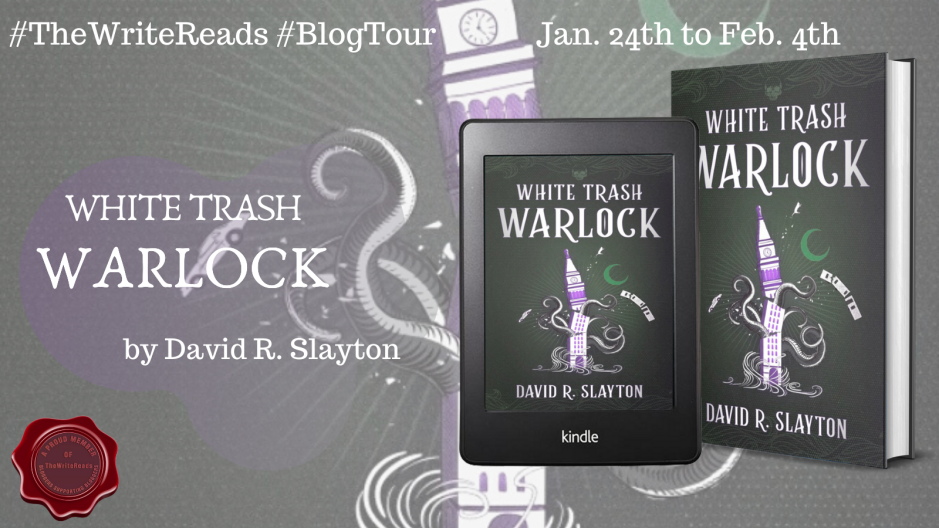 Hey friends! I’m excited to be back for another tour with @ TheWriteReads for White Trash Warlock by David R. Slayton. Be sure to check out all the other bloggers participating in this tour: here! 😍

Special thanks to the author for the gifted copy in exchange for an honest review!

Guthrie was a good place to be from, but it wasn’t a great place to live, not when you were like Adam, in all the ways Adam was like Adam.

Adam Binder hasn’t spoken to his brother in years, not since Bobby had him committed to a psych ward for hearing voices. When a murderous spirit possesses Bobby’s wife and disrupts the perfect life he’s built away from Oklahoma, he’s forced to ask for his little brother’s help. Adam is happy to escape the trailer park and get the chance to say I told you so, but he arrives in Denver to find the local magicians dead. It isn’t long before Adam is the spirit’s next target. To survive the confrontation, he’ll have to risk bargaining with powers he’d rather avoid, including his first love, the elf who broke his heart. The Binder brothers don’t realize that they’re unwitting pawns in a game played by immortals. Death herself wants the spirit’s head, and she’s willing to destroy their family to reap it.

I grew up in Guthrie, Oklahoma, where finding fantasy novels was pretty challenging and finding fantasy novels with diverse characters was downright impossible. Now I live in Denver, Colorado and write the books I always wanted to read. In addition to writing, I have taught workshops and appeared on panels at Denver Pop Culture Con, the Pikes Peak Writers Conference, the League of Utah Writers Quills Conference, and the Seymour Agency Winter Retreat.

By day I’m a software implementation consultant. I love connecting with readers, librarians, and booksellers. If you’d like to contact me for a school visit or appearance, you can email me at author@davidrslayton.com.

TL;DR: This was a unique urban fantasy that has a lot more depth to it than I expected. Yes, we get lots of magic and plenty of supernatural beings/creatures that we’re familiar with (elves, leprechauns, gnomes, dragons), but we also explore themes about family, LGBTQ+ identity, and trauma/abuse. I absolutely loved Adam Binder and the complex but weirdly endearing cast of characters. This story was dark, gritty and action-packed but it also has a sweet unfolding love-story and I can’t wait for more! Can has next book naow, plz?

It admittedly took me a few chapters to get on board with this story but once I did, I didn’t want to put it down and sped through it quickly! This urban fantasy was a very smol step out of my comfort zone with the malevolent spirits and possessions, so I made sure to read it during the day(!), but it had a lot of new-to-me elements that made it unique and entertaining. There were also quite a few twists and turns in the story, only one of which I predicted correctly, and they had me exclaiming out-loud and eagerly reading on!

The story is set in our existing world, specifically in Denver, but Slayton enhances our reality with the spirit world that exists a thin layer away in parallel to ours. I loved how these two existences were brought together so seamlessly and believably. We get to see the real world that exists under the spirit world simultaneously (as Adam switches his sight on/off) and it was really interesting to see how the usually abandoned ‘real world’ locations would stand in such stark contrast to the spirit world teeming with life. The elves’ location in particular had such a lavish and opulent 1920s vibe that radiated old-school charm and I loved it!

As much as I enjoyed the setting and the magic, it was the characters that made this book a winner for me. These characters and their dynamics brought such depth to the story as we explore complex family relationships, LGBTQ+ identity and self-acceptance, and a history of trauma and abuse. Adam’s traumatic childhood has shaped him into a young man that’s full of self-doubt and who believes he’s too abnormal to be loved and accepted because he’s gay and has magic. Oh, how I loved Adam’s character. He made for such a realistic protagonist with his flaws and insecurities. The very relatable personal issues that he dealt with made him more personable and it was easy to connect with him. My heart broke for him so many times throughout this read because of his dark upbringing and his family’s treatment of him. He’s such a kind-hearted and gentle soul and it was so heartening to see Adam start to find comfort and acceptance in his own skin, and to believe in his own worth.

Aside from Adam, the story actually has quite a large cast of characters but it wasn’t difficult to remember who they were because they had unique traits that set them apart. Argent was a badass elf and I loved her playfulness although she also never let people forget she was a powerful queen. I wasn’t sure of Vic at the start but I came to really like his personality and the sense of normalcy he brought to Adam’s life. Their romance had many heartwarming moments that had me melting with the sweetness and I wanted more of it! The characters I initially struggled with were Bobby and Tilla-Mae, Adam’s brother and mother. I hated how they treated Adam and constantly made him feel less-than because of who he is, and while I will never accept how they treated him, we learn about their side of the story and do come to understand their actions. I wouldn’t say they were “redeemed” but it’s clear that the lack of communication and their misperceptions of each other (including from Adam) continue to colour their interactions negatively.

Which brings me to the main reason why I didn’t rate this a full five stars: I wanted more development from a few of these characters and events. Vic becomes more involved as the story goes on but, as the love interest, I wanted to learn so much more about his character and I’m sad we only got a small glimpse of his life at the start. Bobby and Adam do eventually speak about the past and ‘resolve’ their issues but it happens off-page and because their conflict was such a big part of this story, I wished we got to see them hash it out. I also wanted to mention how some scenes changed very abruptly and I don’t know if it’s because of the ebook formatting (I’m assuming it is) but it got confusing at times. From one paragraph to the next, scenes would jump in time and/or location and I’d get distracted trying to figure out if I missed something or if the abruptness was intentional.

Overall though, I really loved this book and I’m genuinely so excited for the next instalment and to see where the mystery takes Adam and whether the other theories I have will be correct! This is a great debut and I’m so glad it was put on my radar.

Have you read White Trash Warlock or is it on your TBR?

My weekend has officially begun and I’m MORE THAN READY to dive back into my Jade War buddy read with @jessticulatesbookblog. I know Fonda Lee is gonna WRECK ME cos you know I’m still reeling from the destruction of my feels in Jade City 🥲🥲🥲
It’s my stop on the #blogtour hosted by @tbrbeyondtours for #CastinFirelight! Thanks to @delacortepress for providing an #ARC in exchange for an honest review! It’s also my first time doing a #booklook and y’all really make it look a lot easier than it was 😂
It’s my stop on the #blogtour hosted by @tbrbeyondtours for Glimpsed!
Ugh, talk about #mondayblues 🙈 This weekend passed by so quickly I can’t even wrap my head around it!
We’ve made it to the weekend, folks! 🥳 What’re you planing on reading?
It’s a truth universally acknowledged that when @illumicrate comes out with those #specialeditions this panda will do anything in her power to get her hands on them! Listen, they may take all my monies but I have ZERO regrets! 😂